Various theories were made about the issuer of these coins:

I. The Koson type gold coins were connected with a Dacian king, Cotiso-Coson, mentioned in several ancient sources. The first who supported this theory was Max Bahrfeldt, based on this author:

Daci montibus inhaerent. Inde Cotisonis regis imperio, quoties concretus gelu Danuvius inunxerat ripas, decurrere solebant et vicina populari. (”The Dacians live unseparated from the mountains. From there, under the command of king Cotiso, they used to come down and raid the neighbouring lands, in every occasion when the Danube, frozen, united its banks.”)

The emperor promised to the Getan King– Cotisoni Getarum regi – the hand of his daughter.

II. Other authors connected the coins with a king named Coson (Koson), another one then Cotiso, who reigned in Dacia. It seems hard to belive that king Cotiso, who commanded over the Dacians in those raveging atacks in the Danubian region, is the same character as the one who Augustus promised his daughter as wife.

III. Coson (Koson) is a Thracian/Dacian king and the coins were minted in his name by Brutus in 42 BC.

These older theories, as no valid argument can sustain this, must be considered void today. 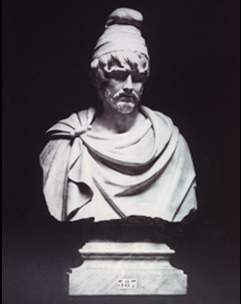 Statue of a Dacian nobleman. Trajan`s time. According to Carmen Maria Petolescu, the following arguments must be taken into consideration:

”To conclude: the staters of KOΣΩN type were issued between 43-42 (before Brutus` defeat, in the autumn of the year 42 BC). (…) It is true that the gold coins were struck for the soldiers whom Coson wanted to send to Brutus in Macedonia. (…) The final confrontation had taken place at Philippi before the Dacian financial support was sent there. The gold coins were “blocked” in the royal treasure of Sarmizegetusa Regia until the emperor Trajan conquered Dacia.”

The most pertinent explanation can be this one:

“The only Dacian gold coins known today must have been minted for military and propagandistic reasons, by one of Burebista`s successor, who was named Koson, as inscribed on the reverse of the coins. Because the main discoveries come from the surroundings of Sarmizegetusa, we have no reasons to belive that the coins were produced in another place, and regarding the dating, it seems acceptable to us to place them sometimes in the second half of the 1st century BC”

A precious observation, regarding the legend of the silver coins (the Macedonia Prima type iconography) is the following:

”The great surprise is the recent discovery, on the antique market, of other silver coins, imitated after the drachams Macedonia Prima type, having on reverse the club of Hercules, and on both sides the legend KOΣΩN / ΔΡOYEIΣ. The name of the issuer has been written to indicate the father: “Coson, of Droueis” (the name of the father without the genitive form). From this might come the conclusion that this dynast was not the direct descendent from king Burebista.”

”Therefore, in our opinion, the existence of a king with the name Coson is perfectly plausible and it is supported by an “epigraphic” representation by the coins that I am focusing on in the present work. The fact that they were found particulary in the area of the Dacian fortresses in the Orăștie Mountains is a strong argument in favour of the presumption according to which this enigmatic king Coson is the one who succeeded Burebista on the throne of the main kingdom that occupied the whole territory within the Carpathians. He ruled from 44 BC until, at least, 30 BC (when he was mentioned by Suetonius).”

We also mention the hypothesis from 1961, made by Mayer Halevy, who considered that the legend KOΣΩN has nothing to do with a proper noun, a name, but it is just used for describing the value of the coin and monetization of gold.