Towards the middle of the 2000s, in the numismatic trade, the silver kosons appeared, first with the same type as the gold ones and second of another type, similar with the tetradrachms of Macedonia Prima. For the first time, they were sold in the 2004 auction of the auction house La Galerie Numismatique Bogdan Stambuliu, (4, 28 November 2004, no. 87). The coins were known to Max Bahrfeldt in 1912-1913, but he considered them forgeries. As the silver coins with the same iconography as the gold ones are produced with a single pair of dies in at least one case, dies used for gold also, the authenticity of these silver kosons is certain.

Silver type Koson
(source: Ira & Larry Goldberg coins & collectibles, 81, 2 September 2014, no. 1515)
Obv. Identical with the one of the gold koson. With monogram.
Rv. Wreath with the legend KOΣΩN / ΔΡΟΥΕΙΣ. Between the two words, a club. On the base of the laurel wreath, a thunderbold.

Until now, only silver kosons with monogram are known, struck, as we said, with a pair of dies also used for the gold kosons.

Silver coin type Koson Droueis.
(source: Rauch, Auction Numismata Wien 2011, the 15th of April 2011, no. 109)
Av. The bust of goddess Artemis/Bendis (?) towards right, in pearl circle and Makedonian shield.
Rv. Wreath with the legend KOΣΩN / ΔΡΟΥΕΙΣ. Between the two words, a club. On the base of the laurel wreath, a thunderbold.

The Macedonia Prima type coins were issued in the first district of Macedonia, as it was controlled by the Romans, between 168 and 146 BC. The average weight is around 16.5 g and the nominal value is 4 drachma (tetradrachm). On the obverse, ornating a makedonian shield is the head of the goddess Artemis Tauropolos. The cult of the goddess was very popular in ancient Greece, in the Thracic world being assimilated with the one of Bendis. A medalion found in Grădiștea Muncelului (Sarmizegetusa) has on one face a depiction of the goddess, very similar to the one from the reverse of the silver koson. 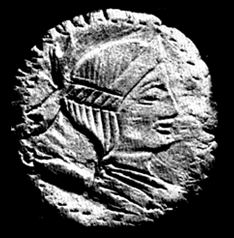 The average weight of the silver coins, both types, is situated around 4.3-4.4 g, the auction house that sold them calling them drachmas.

The importance of the discovery of this silver coins and the link between these three monetary species (gold koson, silver koson, silver koson type Koson-Droueis) is that it demonstrates the existence of a complex monetary system, used or that should have been used in the Geto-Dacian world. Unfortunately, too little is known today about these aspects.