In 1911, the German scholar Max von Bahrfeld wrote the first scientific study dedicated to the subject of the gold koson coins, and correctly identified these coins as Dacians, of one type with two subtypes, if they bore or not a monogram on the obverse. 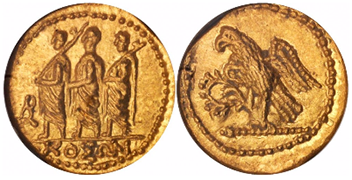 The monetary type was described in detail or in general by many researchers. Perhaps the most known is the following one:

“All the coins known until today belong to only one type, but with minor differences. On one side, considered by all the specialists as representing the obverse of the coin, is shown a Roman consul between two lictors, walking towards left; beneath, in exergue, the legend in Greek KOΣΩN, and on the left side, in front of the first lector, the monogram ; all in a pearled circle.

On the reverse, an eagle with outspread wings is depicted, in profile towards left; he sits with one leg on a sceptre and holds with his right claw a laurel crown; all in a pearled circle.”

The obverse is similar to the reverse of a Roman republican denarius, minted in 54 BC for Marcus Iunius Brutus: four men walk towards left; an accensus opens the way for a consul who is flanked on each side by a lector. On the obverse of the kosons, we find only three characters: the accenus is missing (the first from left on the original coin).

The reverse of the koson type coins is also inspired by a Roman republican denarius, of Q. Pomponius Rufus, from 70 BC. On the original Roman coin, an eagle with outspread wings is represented, towards left, with his head turned towards right, holding in his right claw a laurel wreath and sits with his left claw on a sceptre. The difference between the reverse of the kosons and the Roman denarius is the fact that on the Dacian coins, the eagle has his head turned towards left, and the letters and symbols on the Roman denarii were omitted.

About the eagle, it seems that it has several iconographic varieties.

”I. Delicate aquila – engraved in an accurate style with fine details in rendering the plumage and the body; it has a small head with a short sharp beak and its thin neck is bent over the wreath; there is a pearl under its claw. The harmonious lines outline an eagle with a majestic posture, but a calm and peaceful one.

II. Massive aquila – rigid aspect, short neck, head in relief and ”hooked” beak; the plumage is suggested by rows of pearls, its right wing is close to the wreath. Its strong claws make the eagle look ferocious.

III. Tall aquila – long and strong neck, ”hooked” beak and long wings; it is holding an oval wreath in its right claw. The eagle is not looking at the wreath, but upwards; a slanting, somehow blurred row of pearls starts from its leg. The style is sober and schematic.

IV. Short aquila – robust eagle, holding a round wreath ornamented with small pearls in its right claw; there is a pearl under the sceptre.”

The legend of the coins, namely KOΣΩN, written with Greek letters, can be transliterated as KOSON or COSON. The significance of this work is still unknown, various hypotheses being made until today: a proper noun, in nominative case, the name of the issuer (king) or even a common word, maybe abbreviated. In the classical Geto-Dacian civilisation, the Greek language was used by the elites in diplomacy also, and seems to have been known by some.

The presence or the absence of the monogram on the obverse has always been a criterium in dividing one unique type into two subtypes.

”(…) the series of coins with monogram. Among them, the highest rate is held by the pieces with a monogram made from the letters A, B, P, H, O. (…) A second category is formed from a group with less pieces, with a simple monogram, made from the letter B with a short ending below.”

The idea is again sustained:

”There are two variants for the reverse if we take into account the monogram and the way the fasces are engraved. Thus:

Variant I (reverse) groups the coins that have a monogram with more letters (we distinguish A, B, R, H, O), and the fasces are without an axe. The delicate aquila is always on the obverse of this variant.

Variant II (reverse) contains the staters with a more simple monogram represented by the letter B with a short ending below or, according to some specialists, BA. This monogram together with the name in exergue could be read Βα(σιλεύς) ΚΟΣΩΝ as Bahrfeldt has suggested. Bahrfeldt`s opinion has been followed without any reserves by Octavian Iliescu who has pointed out that it is the only accurate way of reading the monogram. The massive aquila, the tall aquila and the short aquila are the three obverse categories for this reverse variant.”

It has also been written that:

Other theories, like reading it O L B (Olbia) or that it might be read as Brutus, are uncertain.