Banca Națională a României (The National Bank of Romania - NBR)

In February 2005, the National Bank of Romania issued a replica of the Dacian type Koson gold coin. The replicas made for collectors were part of a series entitled “The History of Coinage”, produced by the NBR together with the replica of 20 lei 1968, another important coin in the monetary history of Romania.

Unlike the ancient coins, the NBR replicas are produced as proofs (like a “mirror-type image”), have a title of 999/1000 and a weight of 8.5 g and are marked with the letter “R” from Replica inside the laurel wreath on the reverse. In various collections, patterns of this replica can be found, produced by the State Mint, in silver, goldplated brass and aluminum, as they were produced to check, before the minting of the gold pieces, the quality of the dies.

Another information regarding this subject is that in 2006, the National Bank of Romania issued 4 replicas of Roman coins (emperors Trajan and Hadrian), connected with the ancient history of Romania.
Replici după monede cu caracter istoric emise de Banca Naţională a României
source: http://www.bnr.ro

As a curiosity, because of the low mintage (only 250 pcs), the replicas produced by the NBR are rarely encountered in comparison with the originals, and are more sought out by collectors!

In 2009, a series of goldplated brass replicas (90% copper, 10% zinc) is produced by the State Mint, as a private order. The main characteristic of this issue is the letter R placed on the right side of the obverse.

Various entities have made replicas or forgeries of kosons for commercial purpose: necklace, office ornaments etc. It is still difficult to make a complete inventory of all the varieties and producers of these koson replicas. 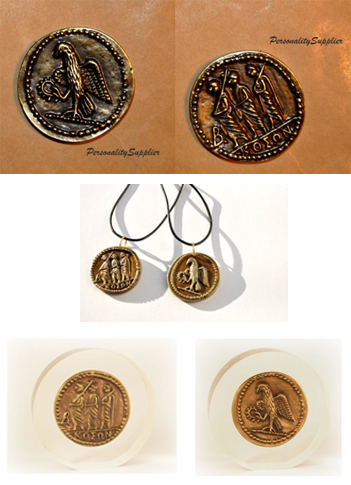 Many fakes, coins produced in the modern times to be presented as authentic ancient pieces, were made.

The most numerous are fakes made in China, having a low quality, and made from brass, sometimes goldplated, or just coated with a yellow metal.

The most dangerous ones have come from specialized workshops, forging ancient coins, and it can be difficult to separate them from the original ones. Until now, at least one silver koson was made in Bulgaria and reported as such on specialized websites. The difference in style between an original and the forgery, and the identification as forgery is confirmed by the discovery of a die used to produce them. Therefore, the coin must be considered a “forgery”.