Many discoveries were made until today, but a lot of uncertain information and confusions exist. The discoveries that are certain come only from Sarmizegetusa. 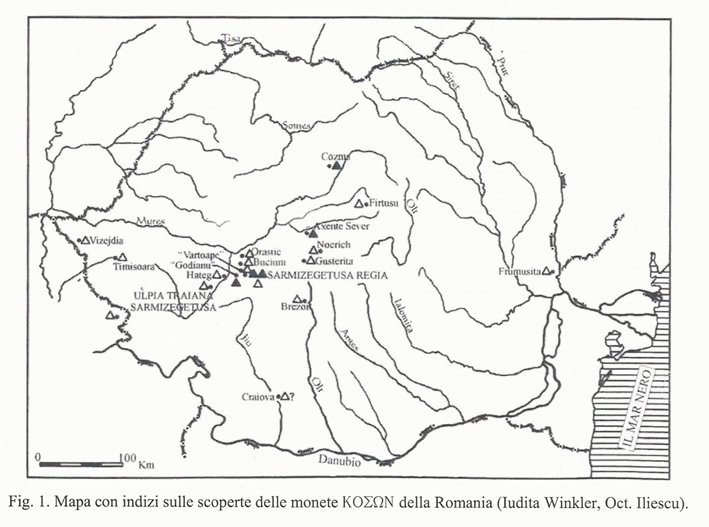 The hoard from Strei River is the largest find of this type. It contained kosons and around 40000 gold Lysymach type staters, with a total weight of around 300 kg of gold. 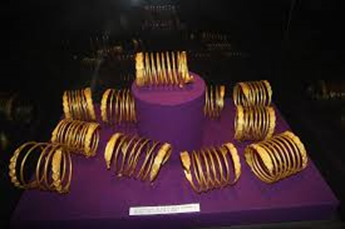 In 1803, a hoard of around 1000 kosons was found in Sarmizegetusa. Out of them, 400 were sent to the Alba Iulia mint and cast, and the rest split all around. Some of them were sent to Vienna:

”The authorities could retrieve a part from this hoard, namely 1000 pieces (the diggers crossed the mountains to Wallachia with the rest of the hoard); there followed an investigation that led to the discovery of the ruins from Grădiștea Orăștiei, where the authorities initiated feverish searches in 1803 and in the years to come. More than 2000 soldiers and peasants gave a hand during this operation.

UThe documents published by S. Jakó bring forth the growing interest of the circles in Vienna in the researches from Gradiștea; meanwhile, the president of the Aulic Chamber, Count Carol Zichy, informed Emperor Francisc I about the discoveries from Gradiștea. The Kaiser ordered that the old coins should be kept in Vienna either the ones that had been found or those that would be discovered. Moreover, the abbot Neumann, the director of the imperial collections of antiquities, considered that the coins had aroused a large interest and he declared himself in favour of the diggings being carried on. Hence, the decree issued by the President of the Aulic Chamber on December 7th, 1803, pointed out the decision to continue the research works ”next year”. Thus, the Exchequer organized some digging campaigns to find other hoards. Another important hoard of 987 gold coins – staters of KOΣΩN: ”987 Stück der gleichen durchgehends Kozonischen Goldmünze...” – dug out at Gradiștea Muncelului, was mentioned in a report from the 28th of April, 1804 (Hunedoara).” 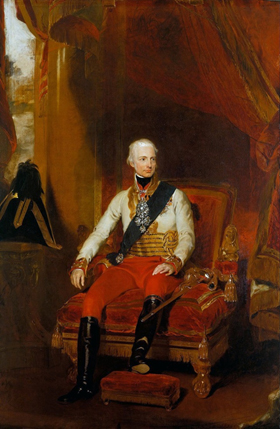 ”The hoard from Târșa was discovered in 1996. It was composed of over 1000 gold coins that were immediately split by the persons who discovered it8. One of them considered selling 208 pieces to the National Bank of Romania headquarters from Deva, and from the rest, many have been given as gift to relatives. Shorly after, therefore, the same headquarters of the National Bank purchased another 3 coins from the same lot, but from another person. The total is, therefore, 211 pieces, that were sent from Deva to Bucharest and now they are kept in the collection of the Banks Museum. Later, 10 coins from the same hoard, confiscated by the police, were brought to the Bank.

The National Bank of Romania is not the only Romanian institution that has in possession coins from the Târșa hoard. Important lots from the same discovery are kept by the National Museum of History of Romania (272 pcs) and the Dacian and Roman Civilisation Museum from Deva (around 42 pcs). Unfortunately, many coins were taken out of the country.

Some scholars who studied the problem of the Dacian royal hoard spoke about a kings’ monopoly on gold. Speaking about events from the summer of AD 106, Cassius Dio wrote:

“Decebalus, when his capital and all his territory had been occupied and he was himself in danger of being captured, committed suicide; and his head was brought to Rome. In this way Dacia became subject to the Romans, and Trajan founded cities there. The treasures of Decebalus were also discovered, though hidden beneath the river Sargetia, which ran past his palace. With the help of some captives, Decebalus had diverted the course of the river, made an excavation in its bed, and into the cavity had thrown a large amount of silver and gold and other objects of great value that could stand a certain amount of moisture; then he had heaped stones over them and piled on earth, afterwards bringing the river back into his course. He also had caused the same captives to deposit his robes and other articles of a like nature in caves, and after accomplishing this had made away with them to prevent them from disclosing anything. But Bicilis, a companion of his who knew what had been done, was seized and gave information about these things.”

The scenes CXXX and CXXXI might be connected with Bicilis and the moment of the discovery of Decebalus hidden treasures. 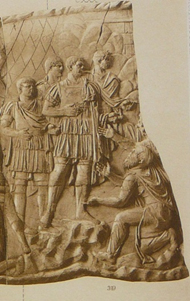 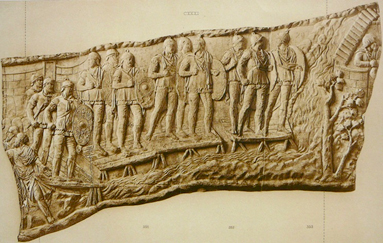 The ancient sources speak about fabulous treasures captured by the Romans:

”…country that was first conquered by Trajan, who defeated Decebalus, king of the Getans, and brought to the Romans 5 million pounds of gold and twice this in silver, without cups and objects that surpass the limit of any price, heards, and more than 500,000 warrior men, with their weapons, as Criton, who took part in the war, has written.”

One Roman pound had around 322 g, so 165000 kg of gold and 331000 kg of silver. This figures were considered exaggerated by modern scholars, who, instead, proposed that only 10% of this quantity was actually captured from Dacia. 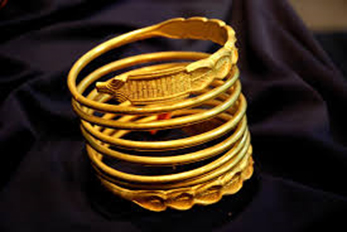 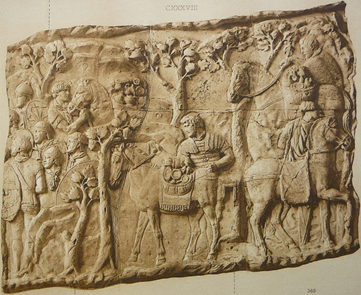