Strabo wrote that after the death of Burebista, the kingdom was split in four, and after that in five parts, adding that “such divisions are only temporary and vary in one way or another.” It is possible that the direct heir of Burebista was Deceneu, the high priest. After Deceneu, from a 6th century AD source, we find out that:

”After the death of Dicineus, they held Comosicus in almost equal honor, because he was not inferior in knowledge. By reason of his wisdom he was accounted their priest and king, and he judged the people with the greatest uprightness. When he too had departed from human affairs, Coryllus ascended the throne as king of the Goths and for forty years ruled his people in Dacia.” 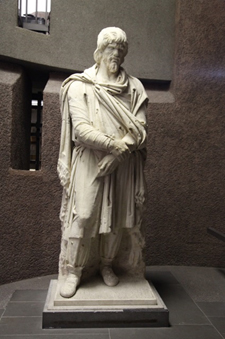 It is possible that the royal line of succession mentioned above ruled the core of the Dacian state. Other kings are known from ancient literature. Strabo mentions Cotiso, maybe the same character as the one mentioned by Horatius in an ode from 29 BC (III, 8, 18), Suetonius in the life of Augustus (LXIII, 4) and Florus (II, 28, 18-19). But Suetonius wrote that to Cotiso, Octavian promised Julia as wife, asking in return for the hand of the king’s daughter, while Florus, who places his kingdom as “the Dacians cling close to the mountains”, wrote about the Dacians that:

“whence, whenever the Danube froze and bridged itself, under the command of their King Cotiso, they used to make descents and ravage the neighbouring districts. Though they were most difficult to approach, Caesar resolved to drive back this people. He, therefore, sent Lentulus and pushed them beyond the further bank of the river; and garrisons were posted on the nearer bank. On this occasion then Dacia was not subdued, but its inhabitants were moved on and reserved for future conquest.”

Another king is Dicomes, mentioned by Plutarch during the civil war between Octavian and Mark Anthony, who had his realm in Moldova. We also know, from the list of Dacian kings of Jordanes, the names of Coryllus who reigned 40 years in the time of Nero, and connected to Scoryllo, maybe the father of king Decebalus, and Diurpaneus.

From this list, a certain degree of confusion can be observed regarding the history of the kingdom of Dacia from Burebista to Decebalus 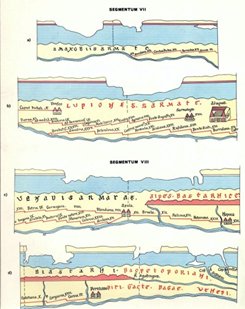 The Romans strongly interfere in the Lower Danube region after the death of Burebista. In 29-28 BC, M. Licinius Crassus, the proconsul of Macedonia, marches against the Dacians and the Bastarnae, in Dobruja, by controlling the Greek cities and with the help of a Geta king named Rholes. Attacked by Dapyx, another Geta ruler from the center of Dobruja, Rholes asks the Romans to help him, and they intervene by defeating Dapyx and Zyraxes, another Geta ruler from Dobruja. Genucla, the residence of Zyraxes, is conquered, and he flees North of the Danube. Dobruja will be under Roman control, administered by the odrysian kings. 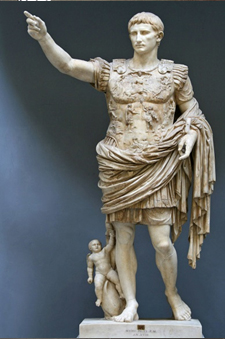 Maybe towards AD 1-4, Cn. Cornelius Lentulus, probably the governor of the new province of Moesia, campaigns against the Dacians. Aelius Catus, in the same period, crosses the Danube and moves to Thracia 50000 transdanubian getas. Augustus, in his Res Gestae, wrotes that a Roman army held back a Dacian attack and crossed the Danube, forcing the Dacians to acknowledge the autorithy of Rome.

The most important Roman action in the 1st century AD was the movement of 100,000 transdanubians, from North of the Danube, in the province of Moesia by AD 57 up to AD 67, during the term of the governor Ti. Plautius Silvanus Aelianus. The Dacians are active in AD 69, during the civil war in the empire, and an attack is rejected by Mucianus and the 6th legion. In 69/70, the governor of Moesia, Fonteius Agrippa, dies during a Sarmatian raid in the province. 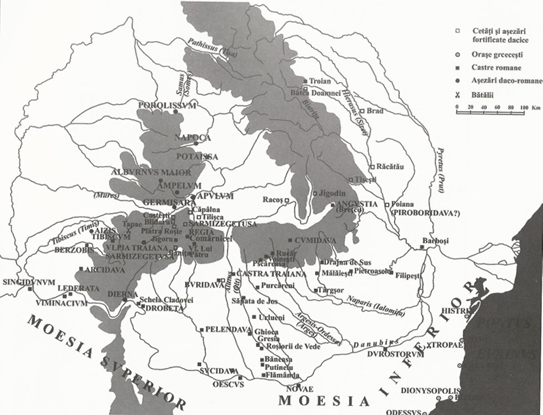 In AD 85/86, the Dacians plunder Moesia, killing Oppius Sabinus, the governor. A war between the Roman Empire and Dacia starts, marking in war and peace the Dacian Kingdom ruled by king Decebalus (87-106) and the Roman Empire, the dramatic events ending with the conquest of Dacia by the Romans. 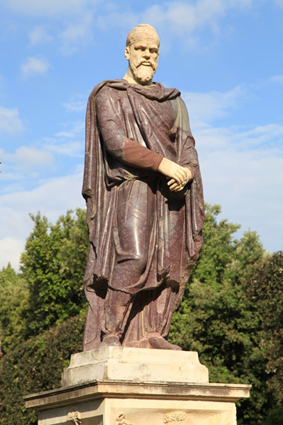